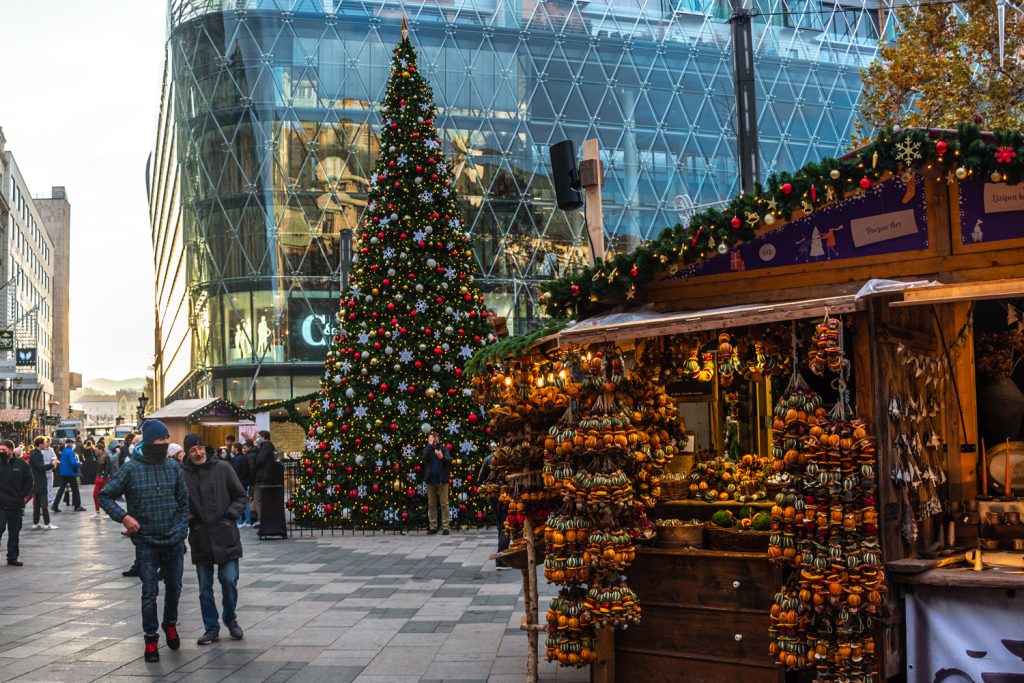 Advent and Christmas on the main square of Budapest

More than 20 years ago, the first Christmas market opened its doors on Vörösmarty Square, attracting hundreds of thousands of visitors every year with its festive atmosphere, unique products and delicious cuisine. But Vörösmarty Square is not only home to the most beautiful Christmas market, it also tells some interesting stories if you look around a little.

In the 1700s, the square was still home to warehouses and offices, but by the early 1800s, the unattractive industrial buildings had been demolished and Theaterplatz was born, named after the German Theatre in Pest built on the site behind the Vigadó Concert Hall. By 1845, the square had become the city’s busiest and most popular location, occupied by pedestrians and entertainers, in addition to the coach stand.

Standing in the middle of the square facing north, you can see Gerbeaud House with its impressive façade, designed by József Hild, the master builder of Pest, like so many other neoclassical buildings in the city centre. In 1858, the two owners of the then vacant lot, the president of the Hungarian Commercial Bank of Pest Leó Lánczy, and master tailor Antal Eisele, asked two architects, Antal Gottgeb and József Hild, to design two buildings, but before construction began, the owners and the architects agreed to replace the original plans with a single, common façade based on Hild’s designs. Thus, the iconic building was born, on the square then named after Queen Gisela, on the ground floor of which Henrik Kugler opened a confectionery in 1870. The famous pastry chef introduced the city to the masterpieces of French confectionery, and it was thanks to him that the people of Pest began to refer to the mignon as kugler.

After World War II, the confectionery was nationalised and for decades, it was known as the Vörösmarty Confectionery, where it served its customers delicious pastries. Legend has it that the former master confectioner was honoured by the creation of the zserbó cake, which is still an indispensable dessert for Hungarian Christmases.

Over time, the legendary confectionery and the building have regained their names, and since then, they have been serving sweet-toothed guests in the heart of the capital in an impressive setting, with desserts of impeccable quality.

The turn of the century was not only an important period for the confectionery industry in Hungary, but also for the landscaping and transformation of the square. The ornate terminus of the Millennium Underground Railway, the first underground on the continent, was built, and the statue of Vörösmarty in the centre of the square was unveiled. Looking closely at the work, carved in Carrara marble and standing on a limestone plinth, we can see that the poet is looking out at the people singing the ‘Szózat’, and has been for 111 years.

Between the 1920s and the 1980s, the square was mainly occupied by cars and buses, until finally, together with Váci Street, Vörösmarty Square, already bearing its current name, was transformed into a pedestrian zone. In addition to the paving and landscaping, the children’s favourite, the Lion Fountain, was also added to the square, and was moved to the mouth of Harmincad Street during the 2019 redevelopment.

Although Vörösmarty Square has undergone many transformations over the centuries, it is safe to say that it has always changed for the better. So when you walk through Vörösmarty Square, take a moment to think of the architects and urban planners who created Budapest’s main square, and who have made it possible for us to enjoy the bustle, the festive lights and the inimitable scent of chimney cakes in the city’s main square for more than 20 years.